Surface 2 and the Sharks

In addition to Windows Phone, I now have a Surface 2. I am writing to let you know that this device does what I need it to do and is in fact fun and useful. Here is a screenshot: 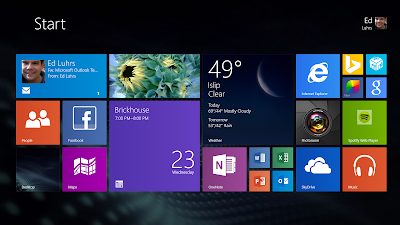 This is an older photo. I’ve moved things around since, and there are more tiles to the right, including Netflix and News apps. But it looks basically similar.

I have been using the device to check Facebook, listen to music, read news articles, write, takes notes. If my laptop were to die, this would do in a pinch, although I’d probably want the type cover for heavier typing instead of this touch cover. The touch cover is preferable though because it is cleanable, water resistant, and easy to fold back. It is especially awesome as a platform for the kickstand when placing the device on the lap or chest.

RT 8.1 is very good. In the month since I’ve had the Surface 2 several updates have addressed the little glitches in this newer version of the system. I have gotten used to the form factor. Like many others, at first I looked at RT as an odd bird: something that looked like Windows but wasn’t. That is still the case, but it is far from a misfortune. The OS runs swiftly and is versatile.

I have the desktop pinned to the Start Screen because I do in fact use it. One particularly great site to run through the IE11 desktop browser is the web-based version of Spotify. If you set sleep mode to two hours on battery and four hours or never when plugged in, you can listen uninterrupted with ease, even while using other programs and Start screen applications.

I have a set of Bluetooth speakers that work well with Surface 2. The Xbox Music app has a great interface. I use it to read my music off the 32GB microSD card I plugged in. I made a giant playlist for parties, filled with less odd selections that other people might like, but still pretty comprehensive in scope. We already know I like all kinds of music.

What else? The Mail, Calendar, People, and Weather apps are all improved. Bing News and Weave are both great readers, as is Reddit To Go! The new Reading List app is a gem. I can store articles there that I might later share on Facebook. And the backup version of Microsoft Office and SkyDrive integration are great bonuses. Netflix works very well and has plenty of good shows, documentaries, and the usual assortment of bizarre indie flicks. All in all I am a happy camper.

Tech media do everything they can to disparage Microsoft. They have most recently have been having a field day with Julie Larson-Green’s statement that Microsoft plans to consolidate its phone and RT operating systems. Here is the top half of page one of a Bing search: 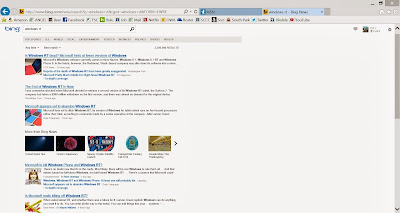 I’d include more, but you get the idea. What Larson-Green said and what is being written are two different things entirely. Most these articles have the same shtick: RIP RT. Very little of this amounts to reporting or useful discussion. It’s all about the money. So many of these publications tend heavily toward Apple and Android. They have been bought. What they do is flood the “news” section of web searches with heavy bias, which in turn shifts perceptions.

Only two headlines offer anything thought provoking. “Reports of the death of Windows RT have been greatly exaggerated” the Washington Post headline reads, and a PocketNow article from farther down the page beyond the screenshot asks “How would a Windows RT and Windows Phone convergence work?”

That last question is the best. Change is coming. How will the market respond? How will Microsoft in turn respond? I am not sure, but I can tell you I am confident that Surface 2 will get meaningful updates for the next few years. Will RT die? I doubt it, just as I highly doubt Windows Phone will die. But I am sure that in 2014 the two will begin to merge into something different. That is what Julie Larson-Green has hinted.

Surface 2 sales are what might get the biggest hit from this bad press, at least in the short run, and that I find sad. The device is all in all stellar. I recommend it highly. Many people are saying Bay Trail tablets are better. Maybe they are; then again, maybe after installing enough desktop software on them, they will start running slow and breathing heavy after a while.

Whatever. The point is, for my money, I would rather go for Surface 2 over an Android or iPad tablet. Even without “legacy” software on RT, I get plenty. There is no dearth of apps for my needs. There's Office. SkyDrive. A USB port. Compatibility with my old Canon printer/scanner. Expandable memory. 1080p resolution. Solid processing power. A kickstand that works on my lap. Best part: the thing is sexy.

I like Surface 2. If you do too, forget these crap tech sites. Get something that works for you. I am glad I did.

P.P.S.: Once again, in defense of Google, I will say I love their services and I do admire Android a great deal for its versatility as a phone. Though I am a huge fan AND user of Windows Phone, I am not willing to take sides with Microsoft against Google. Microsoft should stop the awful Scroogled campaign. I have never been Scroogled – by Gmail, YouTube, Blogger, Maps, Chrome, or anything else Google provides for millions of people.
0 comments

Here are sixteen jazz piano trio tracks I put together on Spotify.