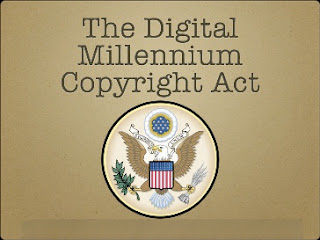 I received a takedown notification today, the first since I started the blog in 2008.

Now this may be good news, if the Woody Shaw album in question is soon again available in print or in MP3 format. As of now I still see nothing but expensive used copies. Sadly, Shaw won't be making any more albums; he died in May 1989.

I will say I like the DMCA quite a lot. It is more than fair, and Google has an excellent policy for enforcing it, which allows me to edit my posts to comply with the legislation. That's just what I did.

I am against stronger legislation such as SOPA. As much as I enjoy singing sea shanties, piracy isn't what we're aiming for here. Just making people aware that there is more to music than what you hear on commercial radio is good enough. I'll gladly remove any link that gets between musicians and their livelihood, and replace it with a link to an online merchant.

One of my favorite trumpet players is Clifford Brown, who died in a 1956 car accident at the age of 25. Despite his short life he made a legacy. His albums with Max Roach include Clifford Brown & Max Roach, Study in Brown, and Clifford Brown and Max Roach at Basin Street - all great.

Brown's style is clean, upbeat, melodic, and inventive in a way that wakes you and gets you dancing. Check out "Daahoud" for example. Brown's first solo begins at 0:37. Also check out this article from the July 1980 edition of Downbeat magazine.