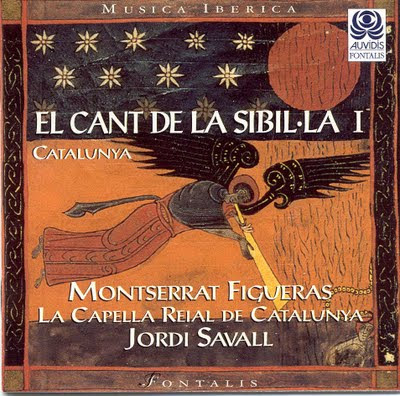 Some of our more extreme brothers and sisters on the good planet Earth believe today is the end of the world. Should we happen to survive any pending catastrophes, I think now is an excellent time to bring you back to the turn of the last millennium and offer you Jordi Savall and Montserrat Figueras with La Capella Reial de Catalunya in El Cant de la Sibil-la I.
Yes, this is apocalyptic music that appeared in its first forms a thousand years ago, as well-represented today as we can possibly get at the beginning of the 21st century. When it comes to early music, Savall is a wizard, and his wife, Figueras, commands the voice of the heavens. This recording is the first of three installments. The Song of the Sibyl (as it's called in English) took many forms in the early Middle Ages and was performed in various interpretations at various sites over several centuries. The performances here feature versions in Latin, Provençal, and Catalan. The second and third recordings are yet other accounts, all equally powerful as the first. See Amazon for links to the other recordings and Wikipedia for links to the texts.

The music is about the end of the world and incorporates various pieces written by Eusebius of Caesarea, Saint Augustine, and troubador poets, depending on which version is being performed. All the texts are similar in nature. I think it is almost better to hear the music first and then look for the lyrics.  At any rate, the music itself is chillingly slow and melismatic, meaning several notes are sung with each syllable. It has a very medieval Spanish character, along with a kind of beauty I've never heard before. Despite the apocalyptic Christian thematic material of the words, the title of the music invokes the very pagan muse of the Sibyl, which first appears in Greek mythology. To better explain this, I've included along with the music an excellent historical article about the Song of the Sibyl, published in PDF format by Goldberg Magazine, a now-defunct bilingual English/Spanish magazine that was dedicated to early music.

Perhaps due to the efforts of Savall and Figueras, The Song of the Sibyl has been declared one of the Masterpieces of the Oral and Intangible Heritage of Humanity by UNESCO in 2010. It is, I believe, worth its title, and as I said before, I've never heard anything quite like it - a very strange and beautiful terror.

I've heard quite a few people say that the conductor has an easy job waving his baton. Others have even questioned why a symphony orchestra needs a conductor. The best way to answer this question is to listen to music - a lot of it.  Each conductor has a different interpretation of a musical score, which sometimes is very easy to hear. Case in point: these two interpretations of the Johann Strauss II polka "Unter Donner und Blitz" (Thunder and Lightning) by Carlos Kleiber and Herbert von Karajan.

Huge difference. One YouTuber observing the Kleiber performance writes, "You can see that ALL the work was done in rehearsal. All Kleiber has to do at the performance is inspire and keep time!" Whether the same can be said of Karajan or not, the point is that as a conductor rehearses with the orchestra, he shapes the piece. In performance, we see Kleiber inspiring the Bavarian State Orchestra along the way and even giving them a great giggle at the end. It seems like he was having the time of his life, and he probably was, but Kleiber worked hard during reheasals. Here is an example from 1970. It is a lot of fun to watch Kleiber conduct. I wish he made more recordings!

Karajan, in this performance with the Vienna Philharmonic, is not as fun. More often than not, he was a great interpreter of music, but the sound here is very austere and businesslike. There is a time for work and a time for play. Some conductors, like Fritz Reiner, were sadistically serious, whereas others like Sergiu Celibidache had a more humane, spiritual approach to music (and people). Whatever can be said of Kleiber or Karajan, they have both left a lasting mark on music. But Kleiber did it with a smile. 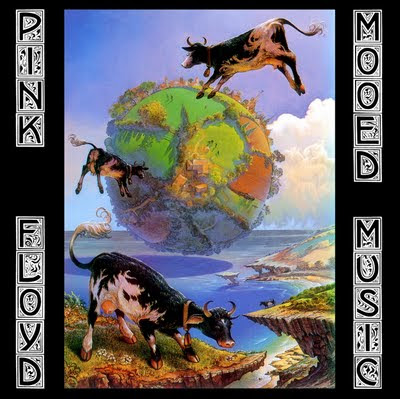 Here is Pink Floyd live from 1970, introduced on BBC Radio 1 by the great John Peel. The track list is as follows:

The early Pink Floyd years have always been my favorite - not just the Syd Barrett stuff, of course, but everything from Dark Side of the Moon and before. Meddle is particularly great, and another of my favorites from their early work is Atom Heart Mother. In the live version included here, you have the best possible version of that title track, beating even the studio version. The substitution of a French horn for the cello is a great choice here, and the choral and orchestral parts are right on point.

Throughout the performance, you get stellar guitar work from David Gilmour, especially in "The Embryo" and "Atom Heart Mother." Richard Wright does great spooky organ work on "Careful with that Axe, Eugene." I even like the ballads - the early Pink Floyd ballads have a demented quality that always put me in a relaxed, reflective, slightly existential mood.

This live broadcast recording, not a part of the official catalog, forever destined to be a bootleg, was released (but never sold for profit) by Harvested Records with Mooed Music as the title. I've included the cool artwork from that release. I first heard this recording on the now defunct WNEW in 1986 or 1987. I recorded it on audio cassette and played the tape into the ground in the years since. Luckily I acquired a digital copy and am glad to share it, courtesy of John Peel, the BBC, the good folks at http://www.harvested.org/, and Pink Floyd.