I read some of Andy Mosher's Radical Brewing: Recipes, Tales and World-Altering Meditations in a Glass sitting in the Barnes & Noble Café today. The topic: how to brew your own beer. I'm not prepared for that kind of undertaking right now; if you are, get that book! It's fun and informative. It was great to learn a little about the brewing process - the kinds of hops, yeasts, and temperatures it takes to turn barley and water into something inspirational.

Ben Franklin wrote, "Beer is living proof that God loves us and wants us to be happy." I agree. Some beers are harsh, though. The harshness usually comes from the kinds and quantities of hops used in the brewing process. The worst flavor to me is a dark, hoppy beer that's poorly made. It winds up tasting like soy sauce or liquid marmite. Don't get me wrong: I like dark beer. A good English Brown Ale or Irish Stout is great in the cold months. I like a few hopped-up beers as well. But I'm finding what I like most is balance, the right amount of hops with the right amount of characteristic flavor.

On the other end of the spectrum, some beers are profoundly underwhelming. You don't get really great flavor in a Budweiser or an Amstel Light. What you get is a mild, malty seltzer. Not my thing. I like tasting good craftmanship. Luckily, in the beer world, that's not too hard to find.

Good local brew can be had just about anywhere. A friend of mine told me he doesn't like American beer. I think he should try a few. Let me share four I like; of these, one is German, the other three are American. Here’s a picture: 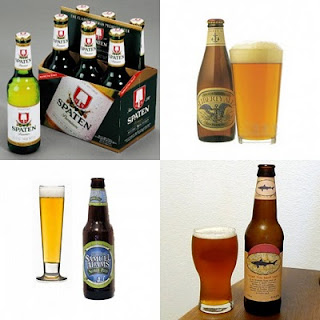 Neat, huh? I made the photo mosaic on bighugelabs.com.

Anyway, first on the list is Spaten, which has the distinction of being the first keg tapped every year at Oktoberfest in Munich. Their Premium Lager is versatile enough to appeal to Bud drinkers and connoisseurs alike. It has all the goods: nice color, great aroma, smooth flavor. They make a good dark beer, Optimator, and the well-known Oktoberfest as well.

Next, from San Francisco, is Anchor Liberty Ale. Look at that color! Tastes even better than it looks. Here’s what I mean by well-rounded - a little bitterness, a little citrus aroma (from the hops), a little sweetness, and a nice dry finish. Cool label as well.

Though I like Sam Adams Boston Lager, they really hit a home run with the Noble Pils. It’s not as orange as the Liberty Ale, and it has a different flavor profile, but it’s every bit as fun to drink. I could easily have two or three of these. Great seasonal brew.

Last, from Delaware, is the Dogfish Head Brewery 90-Minute IPA. Because of the 9% ABV, I don’t recommend more than one or two of these. The aroma and sweetness of the brew offsets the bitter kick. I love it. Reading the label, you get a good sense of the process they use to make the beer. It’s more expensive than the other three, but worth it for the right occasion.

Learn more about beer styles at beeradvocate.com. It’s a great resource for folks who like having a cold one.

The only beer that I've not tried of the 4 that you highlighted, is the Dogfish Head. The other three are excellent beers imho. Another very good American beer is Shiner, brewed in Austen, Texas.

There are some very tasty beers all over the world and I am determined to try as many of them as I can(!) Despite being a Brit, I'm not a fan of the dark and stouty beers here, though. There are, however, some excellent real ales.

The centre of beer excellence for me is the region around Southern Germany and the Czech area. I especially love Bavarian Wheat beer. Right now I'm drinking a glass of Paulaner Hefe-Weissbier. Yum yum.

Kudos to everything you just said in this post! Brewing is a craft. A form of art. One can taste culture, tradition, and history in a pint of quality imported beer.

I'm glad that you specifically talked about Spaten; it's one of my favorites. :)

Thanks for the comments, gentlemen! I am looking forward to trying Shiner and more Southern German and Czech beer.