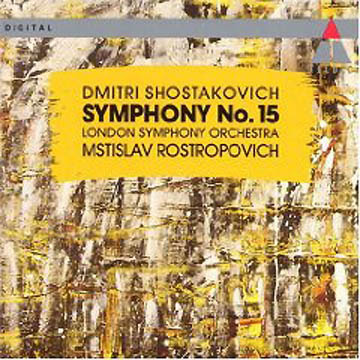 I can't think of a better symphony to share for the Halloween season than Shostakovich's Symphony No. 15, a symphony full of pranks and spooks. Written in 1971 and premiered in 1972, it is very different from most his other symphonies. There are a number of musical motifs from various composers that pop up in surprising ways throughout the symphony. The first movement is often likened to a toy shop, humming along in a playful and strange way. If you're patient with the second movement, you'll hear more than a wall of somberness after a few minutes, and also some motifs that reappear in the finale.

Rostropovich whips through the third movement a little fast; it's still an enjoyable listen, though. He also takes the finale at a brisk pace, but the result is excellent. The last few minutes are unlike anything I've ever heard in orchestral music - it's like the toy shop again, but this time you hear the rattling of ghosts and skeletons.

Though the Rostropovich recording has not been currently reissued, Kurt Sanderling's recording with the Berlin Symphony Orchestra is available on Amazon. He slows things down, but with amazing effect.