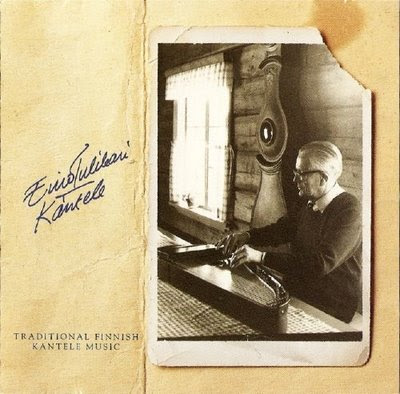 Here is one of the really nice folk music discoveries I've made. Eino Tulikari (1905-1977) played the kantele, an instrument that makes a very distinctive bell-like intonation. The kantele is the pride of Finnish culture - not that you hear it played very often, but it is mentioned in the Kalevala, the national epic of Finland, and so has mythic status.

The first time I heard this, I was transported to another time and place - for some reason, these tunes remind me especially of the 19th century. They seem so nostalgic of former times. I have this collection in my iPod shuffle playlist, and it always seems to fit in very well with the other music. So here's thanks to Tulikari, a masterful musician who shaped this music into superlative form.

Dear Angus, now that you write about Tulikari I listened to him. Wonderfuö! I didn't know that you have it. I lived in Finland for a while, where great parts of its music, especially Sibelius, its painting, like Gallen-Kallela, and the Kalevala epic which I read at least twice - all have the same roots. It's another world! You made my day! Thank you so much!

Ok, my spelling was not that "wonderful"...

You made my day as well! I've only read small passages of the Kalevala. The musical and bardic traditions in Estonia are equally fascinating. Definitely an interesting part of the world, which I've yet to see firsthand. Thanks for sharing...