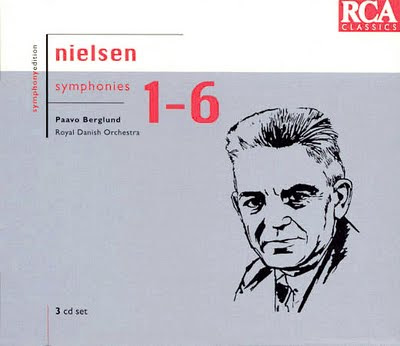 I bought my first Nielsen symphony cycle on CD at Tower Records - Herbert Blomstedt with the San Francisco Symphony Orchestra, which is still among my favorite modern recordings of the symphonies (and the Hymnus Amoris). But it is certainly good to hear more than one version of Nielsen. So here is Paavo Berglund with the Royal Danish Orchestra. Berglund is a very insightful interpreter of Nielsen and Sibelius. Sometimes he plows through gushy, romantic parts of music. For example, in this cycle Berglund does not do a great job on the Fourth's climactic moments. He more than makes up for it in the other symphonies, including the Third, which I'm sharing here.
The first moments of the opening movement of the Third, like those of the First and the Fourth, are a little jarring. Stick it through, though, and you'll understand the logic of it. Each of the movements is tightly constructed in a way that pulls you in. The second movement features the wordless voices of a man and woman carrying a melismatic tune. It's a very sweet sound overall. The third movement has plenty of fine surprises - Nielsen writes very good parts for woodwind.
The finale of the Third is one of my top ten finales of all time. I have about 100 top ten finales; I think I have a serious finale fetish. But seriously, this is just awesome music. If you feel the need to skip ahead to the last movement, don't feel bad. I do it every time. I love it, and I love Berglund's pacing and attention to details...
Download here (no password):
http://www.mediafire.com/?kby9k5dk2mid2kh
For more Nielsen, go to wf's and Peter's blogs. I am a huge fan of the Fourth ("The Inextinguishable") and the Sixth - that last one is really, really wild and bizarre stuff. Can't accuse Nielsen of not being original! The First is great. The Second I'm getting to like. It helps to hear several versions of the Fifth - as with the others, there are many ways to interpret it. If you're new to Nielsen, the best thing I can say is listen to all the stuff he wrote, including concertos, tone poems, choral works... even an opera called Maskarade. Haven't heard that one yet, but the overture is terrific.
Cheers,
Angus

dear Angus:
it's good to meet other Nielsen devotees. i like your idea of "symphonic finale obsessions". thinking about my top 10: Mahler 5+8,Nielsen 3+5, Shostakovich5+10,Vaughan Williams1,Sibelius2+5 ...

Good choices! The Mahler Fifth Rondo-Finale is definitely in my top five as well.

I listened to Nielsen's Fifth when Hurricane Irene hit... Lenny Bernstein with the NY Phil. WOW!!! That is a stellar performance. What a wild symphony to listen to when a huge storm is blowing outside!