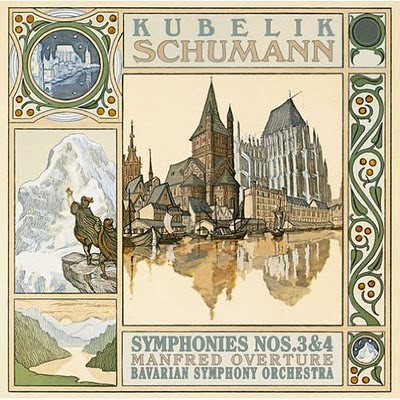 Have no doubt: this is music magic - Rafael Kubelik leading the Bavarian Radio Symphony Orchestra (Symphonie-Orchester des Bayerischen Rundfunks) in Robert Schumann's Third and Fourth symphonies, plus the Manfred Overture. The recording dates from the late 70s and has very good remastered analog sound.

I used to dislike Schumann's piano music, which caused me to hold off on listening to his orchestral music. When I finally gave a listen (recently in fact), I became fascinated with these works. They're bursting with vitality, structurally tight, well-orchestrated... even if the critics say orchestration wasn't one of Schumann's strong points, I can say it all sounds great to me. Give them a try if you haven't heard. I'm starting to get into the piano music as well.

I really like the front cover - found it online. Don't know what specific release it belongs to, but I made sure to include it here in lieu of the more mundane covers floating around out there.

Kubelik is another one of those conductors who never made a bad recording, at least from what I've heard. See Peter's blog here for an amazing live recording of Smetana's Má Vlast with the Czech Philharmonic Orchestra. Wow! As for this recording...

dear Angus,
i totally agree with your words on Schumann. i will never understand reservations to this genius. and kubelik is a genius as well...