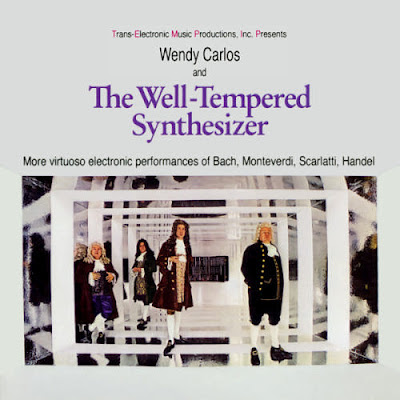 One of the first pioneers of the Moog synthesizer, Wendy Carlos made a famous 1968 album called Switched on Bach, which won three Grammy awards the following year. This was ground-breaking work, as it was among the first recordings to include classical performance on synthesizer. Part of the success of that album had a lot to do with Carlos's skill as a keyboard player, the other part being the wild array of sounds.

Continuing with this success, she released The Well-Tempered Synthesizer in 1969, which I am featuring here. This album features performances of works by Monteverdi, Scarlatti, Handel, and Bach. There are many moments of greatness here, particularly in the Scarlatti sonatas. Some sounds sparkle better than others, but overall the effect is really excellent.

In her own music, Carlos has a knack for making eerie-sounding stuff, as in her film soundtracks for A Clockwork Orange and The Shining. She recorded an ambient album of her own work in 1972 called Sonic Seasonings, which consists of several long pieces named after the seasons. I really enjoy that album - it has many passages of an otherworldly quality blended in with atmospheric and forest sounds. The Well-Tempered Synthesizer, however, is as good a place as any to start if you'd like to better familiarize yourself with her work. There is quite a lot to enjoy on this album. For more information on Wendy Carlos, see here.

Highly interesting and entertaining... Thanks!

Certainly different! I enjoyed listening and hearing her talk about the recording of the album. :-)

I think I still prefered that music played on acoustic instruments, however! Even with jazz, I am generally a traditionalist, that way! :-)

The opening track by Monteverdi sounds too synthesizery, I think. Track #7 is a real gem.