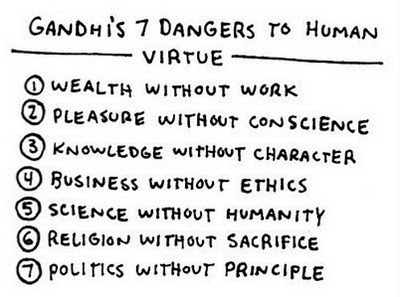 The name of the post is an amalgamation of Mahatma Gandhi and Ravi Shankar. The image above is all over the net with Gandhi spelled wrong ("Ghandi"). So I fixed it in Photoshop and am posting it here. These are good ideas to keep in mind, especially if I ever win the eighty million in the lottery.

As far as Ravi goes, a few weeks ago a friend of mine asked me to share some of his albums with her on mediafire, so I did. Two of the albums are traditional Hindustani raga, and the third is more like world music, albeit with some cool sounds you might like.

A few weeks ago I went into some depth about a piece I included from the southern Carnatic tradition on a compilation I made of various kinds of instrumental music. Now here is music from the northern (Hindustani) parts of India, with the incomparable Shankar playing his sitar.